The smallest unit of territorial division. A rectangle with an area of ~ 4900 tiles. The entire game map is divided into fiefs all with a 2-tile unclaimable buffer between them. One fief can be owned by only one guild and all area in the fief can be used by a guild to construct buildings that will be protected from decay, can have designated access rules for them and so on.

GILDENMONUMENT A Guild Monument is the main structure that represents a guild’s position on the global map. A Guild Monument cannot be erected on a fief that is bordering with another fief with a Guild Monument on it, making it impossible to have 2 guilds settling in close vicinity to each other. Losing Guild Monument removes a guild from the global political map reforming it back to the unoccupied ‘Order’ status.

In case of losing monument tiers, currently owned fiefs will not lose their ownership, even if the total amount of controlled fiefs is above the allowed limit. But this guild will not be able to claim and capture new fiefs.

OUTPOST Outposts are buildings that are constructed by the guilds in order to claim additional fiefs for its needs. Only one Outpost can be constructed on a given Fief. Outposts produce resources in an automated manner for their owners to gather. Outposts must be supported by sacrificing gold, silver or copper coins.

Outposts can be upgraded up to the 3rd level. Upgraded outposts provide a faster production rate, requires more time to claim them and are more resistant to the damage. But what is more important - successful claim of the outposts does not change the ownership of the outpost but just lower its level by 1. Thus a level 3 outpost must be claimed 3 times in a course of few days in order to be actually captured by attackers.

Outpost upgrade levels provide the following benefits to their owners:

If you don’t support a Monument or Outpost:

If you support damaged Monument or Outpost, it will be repaired every maintenance (4% of its maximum durability each in-game day)

A province is a union of ~50 neighboring fiefs. The province can be captured by a guild. Possession of a province grants the right to receive taxes from the fiefs within it but does not provide any additional rights. Each province has a name that is displayed on the map.

PROVINCE OWNERSHIP Every province can be captured and controlled by a guild. In order for a certain guild to get control over a Province, it must issue and win an Instanced Battle against the current owner of the province. Unclaimed provinces still need to be challenged by an Instanced Battle, but attackers will be granted with an auto win.

Controlling of the province does not provide any direct control over the fiefs, outposts or other guild monuments that are within the province borders. But instead, it allows for the controlling guild to automatically gather taxes from the monuments, fiefs and private claims on this province.

STEUERN Taxes are gathered automatically and appear in a guild monument container of a guild, that controls the given province. Currently, the tax rate is fixed at a rate of 20%. That means that the owners of outposts, guild monuments and private claims in this province will have to pay extra 20% to the owner of the province. For instance, if a certain guild pays 1 silver coin per in-game day for their outpost support, they will have to pay 20 additional copper coins to the guild that currently owns the province.

Note: If there are not enough coins for the support and tax, Outposts and Monuments on the fief will be downgraded, damaged and eventually destroyed by the game with an each missed payment.

To see taxes, that your guild will get, press the ‘Taxes’ button in the Monument window.

Once first unclaimed and neutral fiefs and provinces are claimed by guilds they can contest for the ownership of those lands.

CAPTURING A FIEF & OUTPOSTS (RAID MECHANICS) In order to capture a Fief, the offending guild should claim the Outpost of the defenders that is placed on the targeted Fief. In order to do so, attackers must follow the following steps:

Attackers need to have their fief with a level 3 Outpost be bordering with the fief that they want to capture The guild that own attacked fief (defenders) must have an active Guild’s Judgment Hour at the given moment Attackers use ‘Initiate a Holy Judgement’ ability on their level 3 Outpost to make it “burning” with a Holy Judgment fire (it will be marked on the Map with a torch icon). That will make their own fief AND all bordering fiefs and all buildings on these fiefs to be vulnerable to the siege damage, destruction and capturing for the next two hours. Attackers need to use ‘Claim outpost’ ability to initiate the claiming process and prevent defenders from interrupting this process. If attackers succeed, level 2/3 defenders’ outpost will lose one level but outpost and fief will still be owned by defenders. While level 1 outpost will change ownership and will belong to attackers along with a fief it stands on.

There are some details that are important in this system:

An outpost cannot be claimed until one real day passes after someone has used ‘Claim outpost’ ability on it. After successful claiming, the outpost cannot be upgraded for the next 3 real-life days. Outposts cannot be destroyed with an ability nor by inflicting the damage. The only way to destroy an outpost - is to stop its support with coins and letting it to decay. You must keep in mind, that initiating a Holy Judgment on your fief will be considered as a hostile action towards all the neighboring fiefs. Some neighboring guilds that you didn’t want to attack originally might attack your outpost to ‘extinguish’ it and thus save their fiefs from the vulnerability that you have triggered.

If a Guild Monument Tier don’t allow the guild to capture one more fief, then after successful 1 level outpost claiming, the outpost will be destroyed (except fiefs bordering with the Guild Monument).

CAPTURING A PROVINCE (IB MECHANICS) Provinces can be captured via declaring and winning Instanced Battles (IBs). In order to initiate the IB on the province, the attacking guild must meet the following requirements:

Be in the state of war with the guild currently owning the targeted province (defenders) Issue it 24 hours before the defenders’ Guild Judgment Hour starts (ideally at their current GJH, so the IB becomes active the next day at the same time) No other IBs are issued on this province Have control over a province that is neighboring targeted defenders’ province OR

Control a fief with level 3 Outpost in the targeted defenders’ province In order to issue the IB, attacking guild must:

Craft an Instance Battle Totem in a Siege Engineer’s Shop The guild leader or Minor Leader must bring this IB totem to the targeted province Activate the totem in his inventory On the map that appears select and submit the province or Fief with Level 3 Outpost that will be a source of the attack and the wager at the same time If the attacking guild wins the IB, then the control of the province will pass to it. If attackers lose the IB, the defending guild will gain control of the province or fief that was the source of the attack and placed as a wager by attackers. 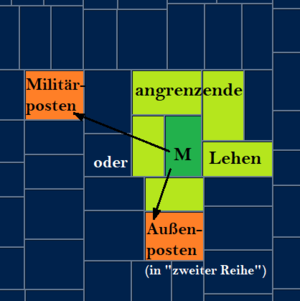 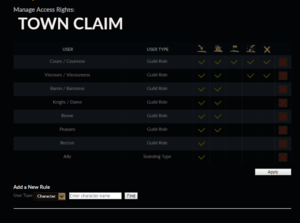 In order to capture a Fief, the attacking guild should claim the Outpost of the defenders that is placed on the targeted Fief. In order to do so, attackers must follow the following steps:

There are some details that are important in this system:

You must keep in mind, that initiating a `Holy Judgment´ on your fief will be considered as a hostile action towards all the neighbouring fiefs. Some neighbouring guilds that you didn’t want to attack originally might attack your outpost to ‘extinguish’ it and thus save their fiefs from the vulnerability that you have triggered.